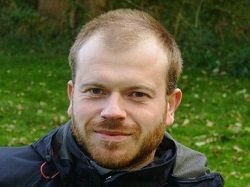 ‘Until l started to do yoga I felt that something was missing in my love life. One day, by coincidence, I started a conversation with a women l met in a shop. I told her about my feeling that there had to be something more to relationships, a dimension that I didn’t know of yet.  She then suggested that I start to study tantra. Later on I found Natha on the Internet. I read about the Vira group and l was attracted to the concept of the spiritual hero. So I started in the Vira group in 2005, and later I joined the yoga class and the tantra class.”