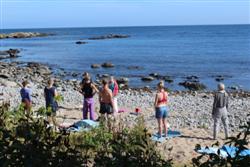 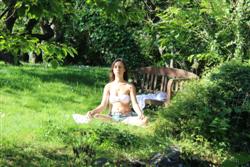 We have reached the 3rd step on this journey to wellness – getting into the level of the mind and the emotions.

After a light morning snack Emil Noll, who doubles in this camp as yoga teacher and psychologist speaks of the terrible effects of mental agitation and stress as the number one source of illness today. Perhaps it is true that some negative thoughts truly can kill (when repeated unconsciously again and again). This points out the necessary solution – learning to become aware of the mind and coming it down.

All this talk about mental training sure builds up an appetite so I am very happy when I get to lunch, enjoying a delicious lasagna while sitting on the sun-lit balcony. 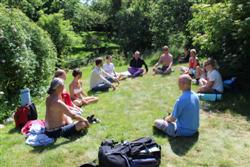 After lunch we pack our begs with water and yoga mats and go on a hiking trip along the cost, through bushes, trees and flowers until we reach an area of cliffs and rocks. We find a nice place where the rocks fall into the sea and open our yoga mats. Emil guides us on an exercise of calming down the mind – we simply listen to the sound of the waves and the wind and observe the sense of hearing. Its remarkable how calming down it is to just observe the act of perception. 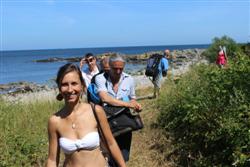 Then we lie down and Yoga Teacher Louise Skjoldan guides us in a yogic exercise called Yoga Nidra – a deep form of yogic hyper relaxation and awareness. The body melts away and unites with all the sounds of nature around us, the mind’s chatter all but disappears. The walk back is made in quiet contemplation.

After dinner we gather on the beach around a bonfire. As we share tea, jokes and stories I notice a triad of NATO military ships just a few hundreds of meters into the sea. It seems to be the punch-line of a cosmic joke: out in the sea are the military war games, being observed from the beach by the mental peace-keepers. 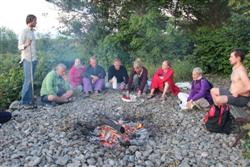 I will leave you with just one joke from the bonfire, before wishing a good night with the hope it will put a smile on your lips, since humor is also a great healer:

A Spanish Teacher was explaining to her class that in Spanish, unlike English, nouns are designated as either masculine or feminine. The word “House” for instance, is feminine: “la casa”.
The Word “Pencil”, however, is masculine: “el lapiz”. A student asked, “What gender is the word ‘computer’?” Instead of giving the answer, the teacher split the class into two groups, male and female, and asked them to decide for themselves whether computer’ should be a masculine or a feminine noun. Each group was asked to give four reasons for its recommendation. 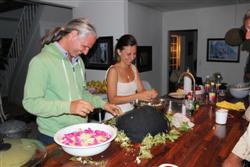 The men’s group decided that “computer” should definitely be of the feminine gender (‘la computadora’), because:

1. No one but their creator understands their internal logic;

2.The native language they use to communicate with other computers is incomprehensible to everyone else;

3. Even the smallest mistakes are stored in long term memory for possible later retrieval;

4. As soon as you make a commitment to one, you find yourself spending half your paycheck on accessories for it.

The women’s group, however, concluded that computers should be masculine (‘el computador’), because:

1. In order to do anything with them, you have to turn them on;

2. They have a lot of data but still can’t think for themselves;

3. They are supposed to help you solve problems, but half the time they ARE the problem;

4. As soon as you commit to one, you realize that if you had waited a little longer, you could have gotten a better model.