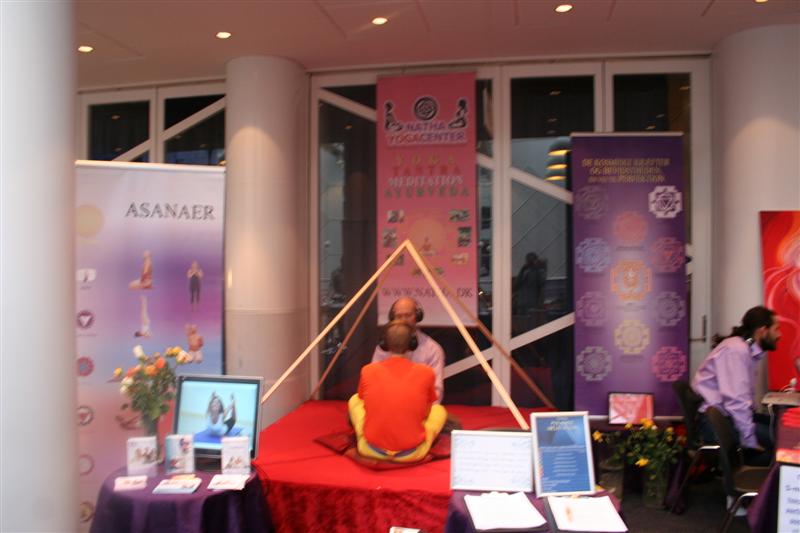 Natha Yogacenter’s stand at the KROP SIND AND – Helsemesse this year has broken old habits and opened new horizons. An international team of enthusiastic yoga students has built and radiated love and wisdom at a stand which left the impression of a live performance … The pyramid meditation, the love lottery with messages from the 10 goddesses of the Tantric Pantheon, Ines Honfi’s newest painting and especially the spiritual books and dvd-s exhibited – all managed to open gates towards an inner journey of exulting questions which recieved several meaningful answers on the spot.

The public, coming mostly from Copenhagen and the areas around, this time has made a sensitive difference compared to other years. The openness, the sincerity were clearly deeper and more authentic than other times. As if there was a question of urgent matter to clarify aspects of the soul, of the heart, of the healing, of the happy relationships; this urge, combined with the joyous or humorous quest for answers, transformed the whole atmosphere into something way more than the usual Danish concept of ‘hygge’(pleasantly comfortable) – but rather into an elevated feast for true seekers of endless happiness.

“So this time, clearly the direction of going inside, searching inside the answers and the happiness has shown up as a new and strong tendency. As if reflecting this idea, starting with the second day of this fair, on top of the Natha Publishing House stand the inscription ‘Kӕrlighedens starter I det indre’ (‘Love starts inside of you’) has spontaneously appeared as a flag showing that the triumph of love is already very close in time to each of those aspiring to this.” 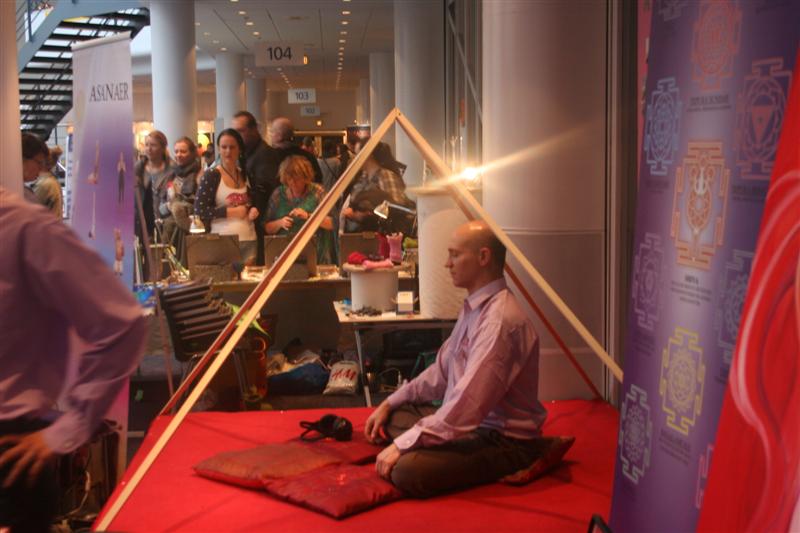 I’ve seen several smiling people standing up from the pyramid meditation… where three important pillars ensured a fast tuning in with a real and profound state of meditation: the guidance of a meditation teacher, the subtle-mystical effect of the pyramid and the well-chosen musical background… all these were meant to help the tuning in with a deep state of resonance with the energy of one chosen chakra (from the seven constituents of the subtle energetic body of the human being). The sessions were very inspiring even just to watch … the scientific and relaxed way of teaching meditation in short words gave immediate effects in the second, practical part… it was effectively amazing to watch how people who never tried to meditate before, all of a sudden, showed a stillness and focus which reflected the meditation teacher’s attitude who was standing in front of them. The roses of success did not delay to appear, after each meditation since a practical, palpable experience of true bit of meditation has born for the one who wanted it; all this for free in an a-’live’ spiritual performance.

The first visitor of the fair was asking – about Natha’s theatre performances from the past if they were going to be repeated this year – already on Thursday evening when the stand was just a bunch of chairs and materials preparing to be assembled… though we had to answer that ‘this time there will be no spiritual theatrical performance’ … still I felt, as if the spiritual theatrical plays from the past in connection with the 10 great cosmic powers or the plays about the eternal game of love between the masculine and the feminine had been transformed this time into the pyramid effect adventure, into the acting in the game of lottery of questions-answers from the 10 goddesses’ lottery or into the visually exquisite art of painting of Ines and of photography in the Natha Publishing House album and books.

The ‘gratis’ love lottery – unserious and mischievous as it might have seemed at first sight – introduced the one who draw it, into the deeper perception of the world through the eyes of the soul, specific to the tantric spirituality. Each message from one of the 10 great cosmic powers (faces of the Holy Spirit from the Hindu Tantric tradition) came at the right time to the one picking it up – summing up an advice, an attitude, a suggestion for 2013 in order to grow in love; due to the directness of the notes very many times essential questions came up: what is transfiguration, sexual continence, polarity, state of androgyny…

“The conversations spontaneously born in this way, have revealed a wide range of misunderstandings about Tantra and once more they proved that Tantra has now and here, clear, practical and well-grounded answers close the modern man’s life.” 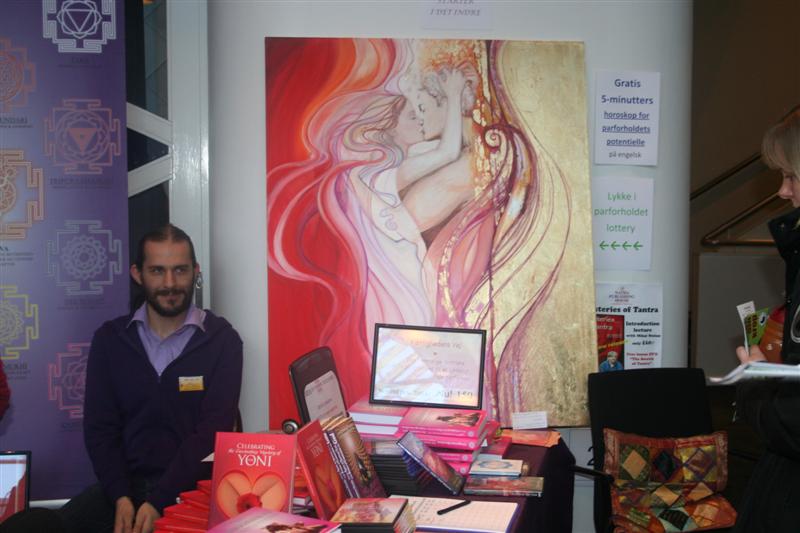 Most of the people were attracted by Ines Honfi tantric artist’s painting style – she generously exhibited next to the Natha Publishing House books and dvds her latest painting – ‘Falling in love’. Representing the objective art of an artist who herself continues to have a sustained spiritual practice, Ines Honfi managed to capture in this painting in an amazingly mature and elegant manner, some hues of the eternal principles (yin and yang) intensely melting in the embraces and kisses of the beginning in any authentic couple relationship.

The way in which the love notes came up in the 10 goddesses’ lottery has clearly shown, from the reaction of the ones picking them up, that they are valid now and here in the real life. Thus, miraculous, synchronistic events occurred when two were picking up the same message at the same time or when two messages completed perfectly each other in case of two friends. More than this, several times there were answers to urgent questions of one’s love life: among the most touching ones being the question of a lady who wanted to know, starting from her message, if the feminine energies of her boyfriend could be a cause of her unhappiness in the couple. The precise and scientifically proven answer to this question (the millenary answer of the tantric scriptures is that highly developed masculine qualities in case of men and intensely manifested feminine qualities manifested by women are at the core cause of happiness in a polar couple relationship) had as an effect the deep relief visible on her… as if she has felt and known this long ago … the only missing point was an objective, scientific system to show it as a constituting law of this entire universe since forever. And this reflection in an objective system has brought clarity and truth.

Another surprising moment was when someone was asking what she can do if she has two lovers – and the answer was laying on the table as the new release DVD The Unveiled Secrets of Polyamorous Relationships – a spiritual approach upon open relationships the happiness that she could find a theoretical reflection upon what her life’s important issue is now…was really rewarding for me.

“A bubbling quest for love, for happiness and the subsequent faith that they must exist somewhere…were pouring from the questions related to the love messages of the 10 great goddesses of the tantric spiritual system.” 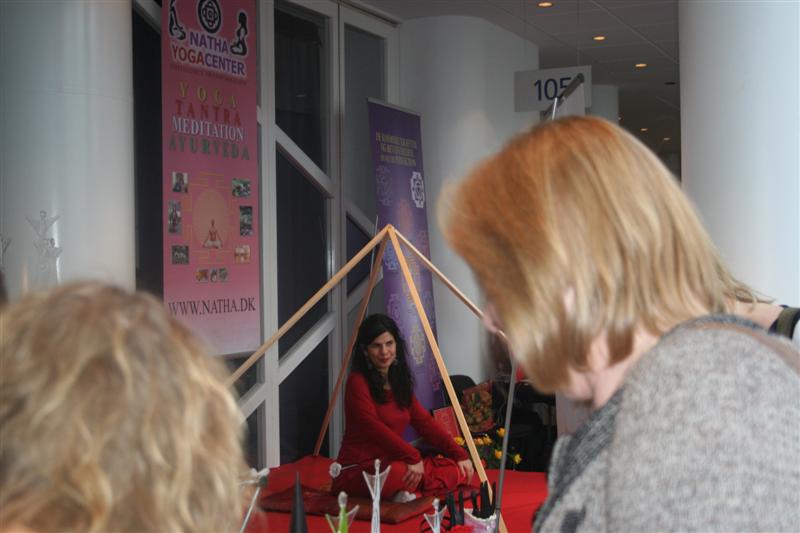 The quest for love in Denmark.

I’m certain that many of those reading these notes have heard of the famous statistic research about the Danes saying that they are happy; and the conclusion of that research saying that on a global scale the Danes consider themselves the happiest of all nations…

For me it was very easy to notice why such a statistic result could appear, in these three days of Helsemesse in Copenhagen 2013: the physical beauty of both women and men, the openness towards unknown horizons, the humor, the deepness and heart centeredness in the way of asking questions and listening to possible answers and the receptivity towards beauty… and in this respect an aged lady has carefully researched the gift dvd coming together with the book Kaerlighedens Vej and the album Celebrating the Fascinating Mystery of the Yoni (both of these new editions of Natha Publishing House) and then after 25 minutes of pondering she was stating that the artistic level of the photographic album cannot be understood by the public of such a fair and she suggested to my curious reaction that we send the book to Moscow where the quality level will be appreciated at its real artistic value… “Much more than just looking for the ‘hygge’ or comfortable aspects of a couple harmony and from far behind all the exalted gazes of the wonderful people visiting the fair, I could feel that there is a deeper beat of hearts opening now towards the divine love… and this love is coming from far beyond this age or these times… many of the faces and body shapes of the people visiting us on these three days revealed and reminded me directly the perfection of beauty and harmony of the sculptures on the temple from Kajuraho …

For all these experiences I am very grateful to the organizers of this beautiful fair, to Natha Yogacenter and to the wonderful beings visiting Natha’s stands at the Helsemesse event 1-3 February 2013.