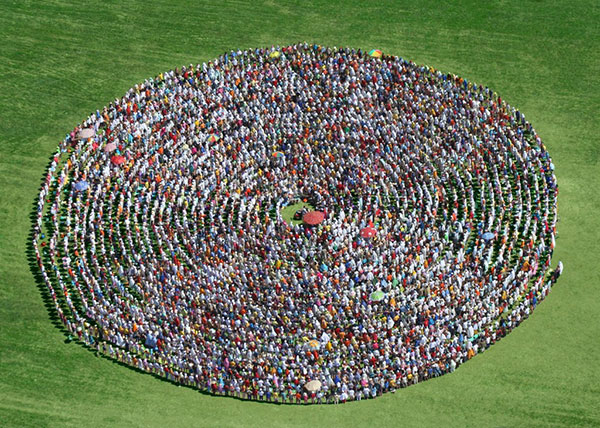 In the Oriental philosophy and also in the modern scientific paradigm, the manifestation of the Universe always contains a double aspect: light and darkness, sky and earth, positive (+) and negative (-), solar (of the Sun) and lunar (of the Moon). In the Eastern thought, the solar, positive, male aspect is called yang, and the lunar, negative, female aspect is called yin. These two concepts are in fact the expression of the Universal complementarities and dualism. The most clear example of this duality is the electric current: we all know that in order to have electricity we need a positive pole and a negative pole. Only together they can produce electrical power. None of them is better or worse than the other. The same thing stands true for the yin-yang concept. Yin and yang cannot be separate: their mysterious rhythm, their subtle alternance makes up the very life of the Universe.

Oriental thought has an extremely simple yet very profound symbol that describes this universal alternance of yin and yang. This is the well known Yin Yang or Tai Chi symbol.

In extremely simple words and from a very general point of view, the main meanings of this symbol are the following:

Everything that exists in the Universe is polarized, i.e., formed of yang-solar (+) and yin-lunar (-). The presence of these complementarily opposed counterparts creates a tension. From this tension, Life is born. For maintaining the tension (therefore, life), one of the poles must predominate. This predominance leads to movement, change, transformation.

The two poles of the manifestation are contained in a tremendously big circle that keeps them together (in the above drawing, the exterior circle should be extremely big, but considerations of space makes this unpractical in this material). This symbolizes the existence of a Transcendental Principle that controls and dominates from a higher level. Only in this way Creation is possible. If the Transcendent Principle wouldn”t compel the two poles to stay together, they would return into Unity, Invisibility, Non-manifestation.

Each polarity contains, in seed, its opposite, which means that everything is relative. Everything, in some deep, mysterious way, is his opposite. Every moment of life includes, somehow, qualities diametrically opposed to those apparently implied. It is well known the truth of the original androgyny (having male and female characteristics in one) of the human being. By virtue of this, the balance between male (+) and female (-) hormones, condition sine-qua-non of life, is possible in all humans irrespective of sex.

Man is predominantly Solar; his seed (the semen) is Lunar (-). Woman is predominantly Lunar (-); her seed (the ova) is Solar (+). Thus, Tai Chi is a perfect symbolic synthesis of Universe and Man, defining in a masterly manner the essence of Yoga Science. The representation of the two poles, the Solar (+) and the Lunar (-), as being equal is an idealistic point of view. A perfect balance leads to absence of tension, hence non-manifestation. In the manifested worlds, there always is and must be a predominant pole. The state of power appears when the two poles are very close to a perfect balance. A strong lack of balance between them results in weakness, suffering, illness, lack of self-control and lack of power.

The spiral is charged with multiple symbolic meanings. Many of these meanings include the dynamic interaction between yin and yang.

The yang-spiral expresses the luminous, solar, dynamic and optimistic energy. When moving along the arm of this spiral in a counterclockwise sense, it is just natural to reach the center, which represents the Source of Creation from which everything that exists started and to which it will return.

The yang-spiral thus represents the circular centripetal movement of returning to the Center. The yang-spiral is related to the movement of spiritual evolution leading to liberation from the cycle of reincarnations, while the yin-spiral is related to the movement of involution and chaining to the reincarnation wheel, since it gets further away from the Center. The spiral is often seen in nature: the snail shell is a well known example. The symbolism of the spiral is scientifically funded by the mathematical theory of the logarithmic spiral and of the Golden Number, or Fibonacci series. This Golden Number was discovered by the Italian mathematician Leonardo Fibonacci (c. 1170 – c. 1240), also called Leonardo of Pisa.

Fibonacci numbers have many interesting properties and are widely used in mathematics. Natural patterns, such as the spiral growth of leaves on some trees, often exhibit the Fibonacci series. A corolary of this is the well-known fractal structures and the discovery of fractal geometry.

In this meditation the participants (paired up man-woman) are holding hands and are arranged according to the succession of the 12 astrological signs of the zodiac. As a result of this arrangement, complex phenomena of resonance take place both with the beneficent influx of the yang energy and with the beneficial aspects of each of the 12 zodiac signs and of the subtle influx of their respective ruling planets. As a result, the subtle aura of each participant is charged with beneficial energy that balances and heals at a very deep level, accelerating in the same time the spiritual evolution of consciousness. Directly proportional with the size (area) of the spiral and the number of participants, each person can thus have the direct experience of an intense state of bliss. Each person represents then a miniature replica of the Perfected Cosmic Human Being. During this yang-spiral, each participant (no matter his or her astrological sign) can experience the beneficial aspects of all the 12 zodiacal signs.

From a general point of view, the archetypal influence that comes during a yang-spiral through each of the astrological signs is the following:

In the same time, through the Taurus, Virgo and Capricorn persons, the participants to a yang-spiral can experience the subtle energies of the earth element (prithivi tattva).

Through the Cancer, Scorpio and Pisces persons, the participants to a yang-spiral can experience the subtle energies of the water element (apas tattva).

Through the Aries, Leo and Sagitarius persons, the participants to a yang-spiral can experience the subtle energies of the fire element (tejas tattva).

Through the Gemini, Libra and Aquarius persons, the participants to a yang-spiral can experience the subtle energies of the air element (vayu tattva).

Through the Leo people that participate to a yang-spiral, all other participants can experience through resonance the beneficial subtle influence of the Sun, which will give the tendency to fight against the darkness, to experience a refinement of consciousness, development of healing powers, the revelation of the divine spirit (Atman).

Through the Cancer people that participate to a yang-spiral, all other participants can experience through resonance the beneficial subtle influence of the Moon, which will give creativity, effortless control of emotions, harmonious personality, the awareness of the social level, tendency to meditate.

Through the Virgo and Gemini people that participate to a yang-spirall, all other participants can experience through resonance the beneficial subtle influence of Mercury, which will give an increase of intelligence, desire to learn and know, articulate communication, power to convince people, inventiveness.

Through the Aries and Scorpio people that participate to a yang-spiral, all other participants can experience through resonance the beneficial subtle influence of Mars, which gives quick reactions, tendency to act spontaneously, strong sexual power, inexhaustible energy, just judgement. Moreover, Scorpio people resonate also with Pluto, which gives spiritual renewal, magical powers, ability to transcend the personality, crystal-clear lucidity.

Through the Taurus and Libra people that participate to a yang-spiral, all other participants can experience through resonance the beneficial subtle influence of Venus, which gives refined love, intense and refined eroticism, transfigurating thoughts, artistic inspiration, attraction to everything that is beautiful and harmonious, good taste, tenderness.

Through the Sagitarius people that participate to a yang-spiral, all other participants can experience through resonance the beneficial subtle influence of Jupiter, which gives profound states of mental understanding, refinement of thinking, expansiveness, enthusiasm, tendency toward the practical study of religion, success in everything, the intuition of the final aim of the human existence.

Through the Capricorn people that participate to a yang-spiral, all other participants can experience through resonance the beneficial subtle influence of Saturn, which gives responsibility, seriousness, love of philosophy, prudence, onestity, power of adaptation to all kind of difficult situations.

Through the Aquarius people that participate to a yang-spiral, all other participants can experience through resonance the beneficial subtle influence of Uranus, which gives spirit of adventure, creative power, search of meaning, focused attention, will power, self-control.

Through the Pisces people that participate to a yang-spiral, all other participants can experience through resonance the beneficial subtle influence of Neptune, which gives deep spiritual intuition, expansion of consciousness, direct experimentation of the beatific void, divine love without object, the transcendance of the inferior structure of personality, mystic revelations, the perceiving of the grace of God, ability to project into parallel worlds.

If we were to make a synthesis, we can say that during the yang-spiral, the resonance with the subtle energies of:

A specific aspect generally felt by people who participate for the first time to the yang-spiral meditations is that they might feel very clearly the areas of the body that are inbalanced, the subtle energy centers that are blocked and the aspects of the being that need improvement. Even though this might manifest as a slightly unpleasant sensation in the respective areas, in the subsequent meditations these effects will gradually diminish and disappear completely as a result of the balancing and healing effects of the huge beneficial energies that manifest during the spiral.

For a better idea of how the spiral looks like, see the video clip taken at the Yoga summer camp in Costinesti:
See youtube video here